up all night, when day comes one doesn’t
belong to it somehow, having traveled
great distance to arrive in a place
materializing for the first time,

or discovering the world has gone on
without you and you’re something of a ghost,
still, there’s a peace in it, the morning with
its birds and garbage trucks, and the usual

sensory disturbances, meteors,
distant fireworks, and that damned noise always
in your head like a world full of June bugs, the
sound of those swamps along the Pascagoula,

like places people have never been or
should not go into, all that ochre mud
and oppressive moss and cypress trees,
you don’t remember fishing, just that

someone caught a gar, but you remember
the boat low and slow and being afraid
to dip your hand in, all those prehistoric
things under that muddy water and on

the banks tiny creatures popping up from
the mud like strange flowers blossoming,
unless you’ve conflated that with another
time and place, South Carolina coast

a host of small crabs erect and waving
as if telling you to go away, the
things one’s mind returns to, though when you get
down to it, you don’t have a memory

for fine detail and suspect other people
invent that lavishment they recall,
while you recollect only flashing
images and feelings words can only

sneak up on and stall the revelation,
now this morning sky and you’re thinking how
you’d like to spend the day just watching clouds,
just watching the way they do, without

thinking they look like anything else,
just trying to look through seeing,
to get clear of seeing, that magnetic
pull to make the world cohere, though of course

one is clear of all of it soon enough,
that wash of feeling one could have been
anywhere but here one is, till letting go
comes upon you more stringently than

hanging on to what anyway—dreams and
expectations, things that seem to have
continuity because they don’t exist–
how panic can feel like exhilaration

as if one has things still to experience
that bring joy, not mere release from sorrow
but something that busts up into the room
with its own kind of glad, how to get

the past to let go of you, you have to
relinquish what it has taken that’s gone,
how now I know you talk to the cats when
you think nobody else is awake.

Noisy birds–hollering,
iterating, so loud and close
they’re in your head: wake up.
If no one hears,
does it even matter how you
squeeze the interval
or sweep the yard?
But what do I know,
it’s the bird’s world.
In my dark wood,
birds too far up to hear
make nets to catch
the stars and weather,
but down here there’s
not enough air left for
the middling get-through
when the future’s done,
just the sound of not listening,
the buzz of mere medium,
so no matter what you say
it’s just the meme
passing through you,
phatic static
and a lot of hailing.
Not that anything is
wrong with that of course,
now the freeway’s louder
than the birds. 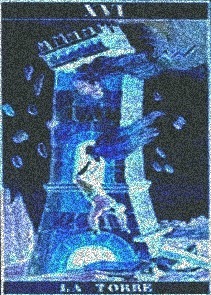 this morning every morning

wherever he is he cannot hear you or he isn’t listening, didn’t, wasn’t

a full place maybe, maybe not like the big empty incessant human twittering makes after awhile it’s all just sound no message only medium no matter what it says it says I am here or I am here you are there or stay there or come here, or we are here, or here we are or are we here? or where are you?

though later on you know it’s just the only oneness the imperative of our species makes of all of us but there they are close to doing something the concept of private was invented for we think we’re bugged by what? their lack of decorum or thinking they think their rapture has conferred invisibility upon the proceedings or even that we know

I was it and now it is some other thing

how looking for a pen has become my person from Porlock who gets here earlier and earlier each day why the fuck do all five million of them become invisible when all you want is just one, I glance at the keyboard and think nah it’s just not the same

we’re in your dorm room you show me a poem you composed on your typewriter and I say you can write poetry on the typewriter?

and you say why the hell not?

what a discovery that what you think for yourself didn’t always have to be thought with a pen, that you could also think what matters to you on that portable manual thing god I am so old you took to college thinking it wasn’t in a way really yours because it had to be dedicated entirely to the abysmal papers you would write and now

it slips in and roughs things up until

all the other sounds in it that weren’t weather

I loved you anyway

and then the place has emptied out and the sun is going down and I find you and there you are like some natural thing a tree or a cactus but translated into cartoon goofiness and I say what are you laughing at? and you say

just the way it does

thinking everything is just the way it does, that the world indeed is all that is the case if at least for the moment that can mean that as soon as we know it we never again belong where we are because we know we are not what we think we are

but it’s all the case we have.